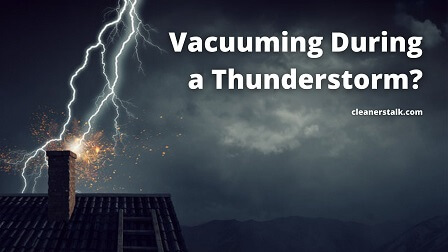 Is It Safe to Vacuum During a Thunderstorm?

Cleaners Talk is supported by its readers. This post contains affiliate links, we may earn a commission at no additional costs to you. We hope you love the products we recommend!

Thunderstorms can be quite scary even if you are indoors: you hear thunder and intense rain pounding on the roof, you see lightning, and you start getting worried about your safety - overall, it's not a pleasant experience.

You’ve probably even heard the common advice that you shouldn’t use your electrical appliances like your laptop, fridge, and vacuum cleaner during a storm. So, is it safe to vacuum during a thunderstorm?

Vacuuming with a cordless vacuum is safe, but vacuuming with a corded vacuum during a thunderstorm can be dangerous. In fact, not only should you not use a vacuum cleaner, but you should unplug electric appliances from their sockets to minimize the chance of lightning causing damage to your house.

Not everybody knows what to do during a thunderstorm, so we have compiled a list of things you should and shouldn’t do to stay safe. Although the chances of lightning actually hitting your house are slim, your power supply and the electricity grid in your city can be negatively affected in other ways.

Lightning Can Cause Major Power Damage

As you probably already know, lighting is the most dangerous part of any thunderstorm unless you have a leaky roof, in which case, the rain won’t be too helpful for you either. A lightning flash is an electrical discharge originating in the clouds during a thunderstorm, and it often aims to strike the ground.

In fact, according to Nationwide, lightning killed an average of 31 people a year between 2006 and 2015, and injured another 279. That is a relatively high number folks!

Because so much electrical energy is contained in lightning bolts, they usually try to find the fastest way to the ground. One of the ways they do that is by striking tall objects such as trees or lightning rods so that the lightning can travel unimpeded.

Electricity cables in the air are especially vulnerable during thunderstorms because they are attached to long wooden rods intended to form a power grid and supply an area with electricity.

Luckily, most modern towns and cities have moved their power cables to run underground, which effectively decreases the chance that a thunderstorm would cause a major power outage.

Flashes of lightning can cause damage in one of the two following ways:

Is It Safe to Vacuum During a Thunderstorm?

With that out of the way, let's see how a thunderstorm affects electrical appliances...

How Are Electrical Appliances Affected

Electrical appliances are any devices plugged into the power grid through a socket in your house.

In the U.S., power sockets have a voltage of around 120 volts. In other parts of the world, that number goes up to 240 volts. As you can imagine, the power sockets in our houses were not built to withstand the amount of electricity they experience when they are hit by a current with millions of volts of power like lightning.

This voltage surge from the lightning can cause any devices that are plugged into a power socket to short circuit or fry. So, when there is a surge in a city’s electricity grid during a thunderstorm, it is already too late to save your plugged-in appliances.

This is why it is recommended that you unplug all of your electrical appliances before the storm hits. Do not use any electrical devices like a hairdryer or a corded vacuum cleaner.

You can check the specifications for your vacuum cleaner or other appliance in the user’s manual.

However, it is generally recommended to not vacuum during a thunderstorm - your daily chores can probably wait for the lightning and thunder to simmer down. Unplugging all of your devices is your best bet for staying as safe as possible inside your house during a storm.

There are also a variety of other things that you shouldn’t do during a thunderstorm that people don’t often think about, so we have compiled a list of tips for maximum security.

What Not To Do During a Thunderstorm 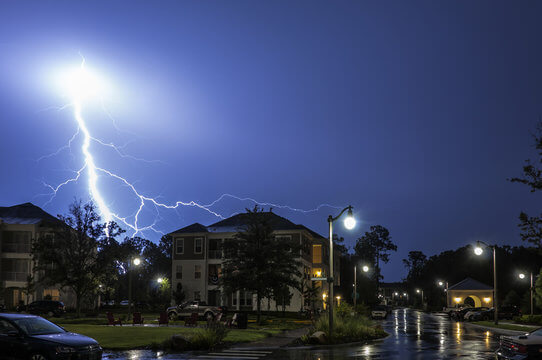 We are all busy people living busy lives, and we don’t often stop to think or register that there is an incoming thunderstorm in our area. While it may not always be possible to implement every safety tip that experts recommend, it is a good idea to keep all of these in mind if a storm gets really serious.

As we have already discussed, using plugged-in appliances of any sort is a no-go (with small exceptions). Whether it’s your phone charger, your hairdryer, your dorm-seized refrigerator, your TV, or your vacuum, make sure you unplug all of these.

Unplugging your fridge may be more of a nuisance than the rest because it can cause your food to spoil so that one is up to you – the fact is that most people choose to leave their fridges plugged in.

Another tip that is harder to implement in practice is disconnecting your internet cable. You are probably wondering, “what am I going to do without the internet until the storm passes?” and that is a reasonable concern. Still, if you want to go all the way regarding your safety during a storm, then this must be done.

On the other end of the spectrum, you should also avoid using a landline phone - this piece of advice would be much easier to do because almost everyone owns a smartphone nowadays.

Surprisingly, using your water supply, in addition to your electricity supply during a thunderstorm, is also not a great idea. This may be counterintuitive to some, but during a storm, you shouldn’t:

Similar to the landline phone wires, the electricity from the lightning can travel through the pipes in your house, and you can get hit by the current via the pipes. Moreover, a lot of currents can be distributed through the water, so in this case, being wet offers no protection.

Lastly, you shouldn’t go outside under any circumstance, and you should also try to keep away from your windows because they can conduct electricity too.

Luckily, many modern buildings are protected against thunderstorms and lightning bolts in one way or another. They have what is called lightning protection systems. These systems can do the following:

So, is it safe to vacuum during a thunderstorm? It can wait. When we say that unplugging your devices is the only way to prevent them from getting damaged, we really mean it – and that includes your vacuum cleaner!

Using a Cordless Vacuum Cleaner During a Thunderstorm

I write about house cleaning and vacuum cleaners. For me, nothing is more important than a clean environment to ensure both a healthy and happy life.