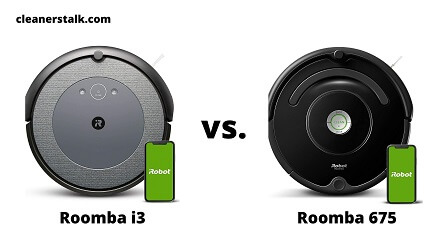 iRobot Roomba i3 vs. 675 Complete Comparison

With the prevalence of Roomba 8th and 9th series, many would think that older models are now obsolete. However, that is not the case. Take the Roomba 675 for example. It is still sought after by many homeowners thanks to its affordable price. Because of this, many like to compare it to newer models, like the Roomba i3.

In this post, we will compare the Roomba i3 vs. 675. While it’s clear that the newer Roomba i3 is simply better than the Roomba 675, let’s find out if the latter is still worth buying. After all, not everyone needs to use all the bells and whistles that come with more advanced Roomba models. Let’s get started.

A simple, yet reliable Roomba for daily cleaning.

The Roomba 675 is part of the 4th generation of Roombas, released in 2012. The AeroVac Bin and advanced cleaning head were introduced as standard features in the Roomba 600 series, which are thought to help keep the brushes cleaner. It can run for about 90 minutes and needs about 180 minutes to recharge itself.

On the contrary, the Roomba i3 is part of the 8th generation of Roombas, released in September 2020. It is created as a lower cost robot similar to the Roomba i7. The i3 relies on a downward optical encoder and gyroscopes. It can run for about 75 minutes and needs about 90 minutes to recharge itself. 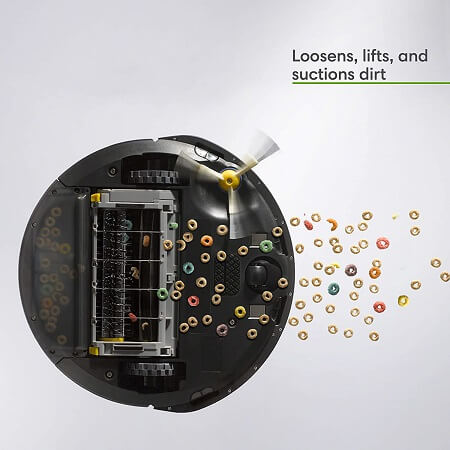 The Roomba 675 still uses the bristle brushes. While they can clean fairly well, they may get tangled more often.

When it comes to collecting dirt, the Roomba 675 has a dustbin capacity of 0.5L, which is pretty much the industry standard. It can do a decent job on hard floors, as most robot vacuums do. After all, hard floors are the easiest surface for any Roomba to clean. It does a good enough job for daily cleaning on hard floors. 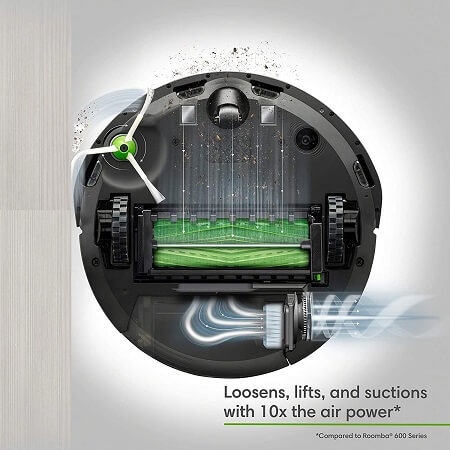 The Roomba i3 has 10x the suction power of the Roomba 675. Therefore, you can expect the Roomba i3 to pick up more dirt and collect more dust. It also has high-efficiency filters to prevent harmful allergens from recirculating back into the room, something that the Roomba 675 does not have.

Moreover, the Roomba i3 is equipped with tangle-resistant rubber brushes to minimize hair and carpet entanglement. While high-pile carpets can pose as a challenge for the Roomba i3, low to medium-pile carpets should be no trouble for it. Overall, it is simply better in cleaning dirt than the Roomba 675.

The Roomba 675 uses the older iAdapt navigation system. It does not have a camera, so it utilizes bump sensors to sense obstacles and cliff sensors to avoid stairs. Because of this, expect the Roomba 675 to move in a random pattern. It will cover and clean the entire floor plan, eventually.

Thanks to the new-and-improved iAdapt 2.0 navigation system, the Roomba i3 is smart enough to create a map of your house. Because of this, it can move in organized rows instead of moving randomly. More impressively, the Roomba i3 is one of the best in navigating dark floors. How’s that for navigation?

Another drawback to the Roomba 675 is the inability to recharge and resume. Because it does not create a map of your house, the Roomba 675 cannot continue cleaning where it’s left off. While the battery can run for up to 90 minutes, you need to place the Roomba manually on certain areas you wish to clean.

The Roomba i3’s battery life is pretty much identical to the Roomba 675. It can run for 75 to 90 minutes before recharging itself. The difference, however, is that the Roomba i3 can resume cleaning once the battery is fully charged. This is made possible because of its mapping feature. In our opinion, this is very useful.

Additionally, the Roomba i3 is compatible with the self-emptying base, so the Roomba i3 can empty itself after cleaning. When it docks, it empties its dustbin into a disposable bag. We’ve tested it and found that it can empty the Roomba's bin up to 30 cleaning cycles, giving you more time to worry less about your Roomba.

WINNER: The Roomba i3 comes with better features that promotes convenience, far more than the Roomba 675. Just like night and day, the difference between the Roomba 675 and Roomba 93 is simply too much. If you want autonomous cleaning and less work, then the Roomba i3 is the clear choice.

A simple, yet reliable Roomba for daily cleaning.

And there you go, the complete comparison of the Roomba i3 vs. 675. Don’t expect the Roomba 675 to beat the Roomba i3 anytime soon, as the difference in features is too far apart. It’s like comparing your local high school basketball coach to LeBron James, so there should never be a debate about it. 🙂