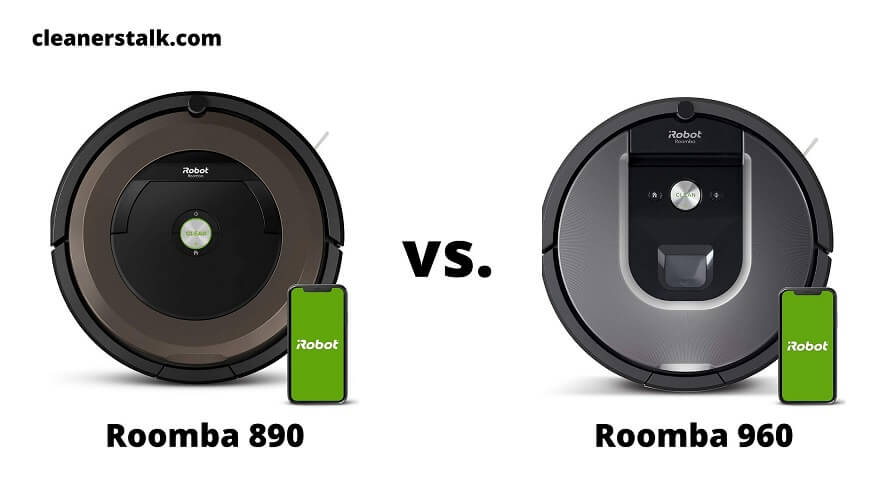 The Roomba 800 Series and 900 Series are two of the most well-known and sought-after robot vacuums from iRobot. In fact, one from each series, the Roomba 890 and the Roomba 960, are often compared to each other side by side. After all, both are simply excellent. So what makes them different from one another?

While the Roomba 960 can move better than the 890, is it worth the higher price? The Roomba 890 is still an excellent mid-tier robot vacuum. After all, not every homeowner needs all the bells and whistles. In this post, we compare the Roomba 890 vs. 960 and find out which one deserves your money.

The middle ground between cheap and expensive.

While the Roomba 890 is brown in color, and the Roomba 960 is grey in color, both are near-identical to each other in terms of physical appearance. They have the same shape, weight, height, even the same high-efficiency filters. Both Roombas also come with durable lithium-ion batteries.

Additionally, both the Roomba 890 and 960 have Wi-Fi connectivity, giving you voice control over them via Amazon Alexa or Google Assistant. Whichever you choose, you can expect a one-year limited warranty, so be sure to buy either one from an official vendor (all of our links point to the official iRobot Amazon listings).

Now to make it simpler for you to decide which one suits you best, we will compare each Roomba based on three criterias: cleaning performance, navigation system, and other notable features. After each round, you should get a clearer idea which one is better. Here is the iRobot Roomba 890 vs. 860 comparison:

As far as cleaning performance goes, the Roomba 890 uses the AeroForce 3-Stage Cleaning System which provides up to 5x suction power than older Roomba 600 Series. We are fairly impressed by its ability to pick up dirt on hard floors, while the results were hit-or-miss on carpeted areas, especially thick ones.

The Roomba 980 also uses the same AeroForce 3-Stage Cleaning System, so you can expect the same suction power as the Roomba 860. Cleaning results are pretty much the same and there is nothing significant between the two. Both have side brushes that will run along the edges and corners.

However, the Roomba 960 takes it to the next level by having Edge-Cleaning Mode. When enabled, the Roomba 960 moves along edges and focuses its cleaning efforts just for the edges. The side brush sweeps dust and debris to the center of the area, where it can be easily picked up by the Roomba.

WINNER: The Roomba 960 wins the cleaning performance battle over the 890. While both use the same cleaning system and deliver similar suction power, the Roomba 960 trumps the Roomba 890 because of its edge-cleaning mode. It can clean edges and corners better. Just expect the battery to drain quicker when using this mode.

For navigation, the Roomba 890 uses the original iAdapt technology. While it is great in detecting objects and avoiding obstacles, the Roomba 890 does not have the ability to create maps. As a result, the Roomba 890 moves randomly. It will eventually clean everything, so there is some method to its random movements.

The Roomba 960, on the other hand, uses a newer iAdapt 2.0 navigation with vSLAM technology. It has a mounted camera, giving it the ability to map its surroundings to clean an entire level of your home. As a result, the Roomba 980 cleans in a neat pattern because of the better camera system.

The camera also allows the Roomba 960 to detect obstacles long before the touch sensors will pick up on them. This provides better mapping of the area, as well as better navigation while cleaning. While you can let objects lie around your house, it’s always a good idea to clean them before using the Roomba. 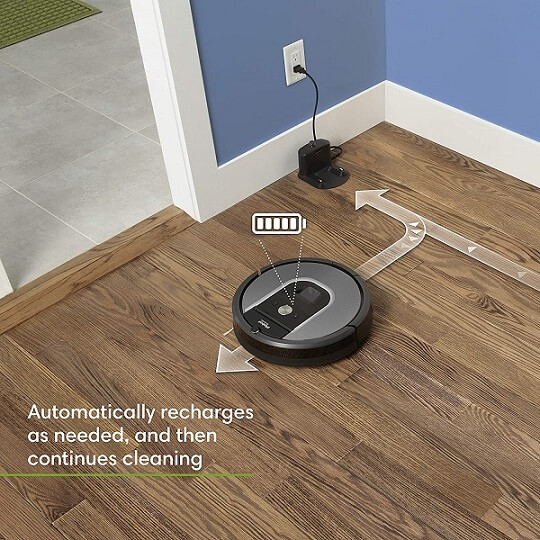 The Roomba 960 can recharge and resume while the Roomba 890 cannot.

Both Roombas are able to monitor their batteries on their own. When the battery is low (usually at about 15%), both Roombas will stop cleaning and return to the charging station to recharge. However, the Roomba 960 will continue cleaning where it's left off after the battery is recharged, thanks to its mapping technology.

On the contrary, the Roomba 890 will stay docked in the charging station, even when it’s fully charged. To resume cleaning, you have to command the Roomba 890 to continue cleaning. This can be done via the smartphone app, by using voice command, or manually by pressing the button on the Roomba.

Another noteworthy feature found in the Roomba 980 is the Clean Map Reporting. The Roomba 960 can send reports on its cleaning progress. Using the iRobot app, you can see details like where the robot has been, its battery level, even notifying you if it got stuck in a certain area of your house.

WINNER: Once again, the Roomba 960 tops the Roomba 890 thanks to its more advanced features. The Roomba 960 is smarter than the 890 in the sense that it can return to its charging station and continue cleaning without your command. If you want better automation, then the Roomba 960 is the clear-cut winner.

There’s no reason for buying the Roomba 890 over the Roomba 960. With the 960, you’ll GET EVERYTHING ON THE 890 plus: superior mapping and navigation system, edge-cleaning mode that cleans edges better, and continuous cleaning where it can continue cleaning after it has finished recharging.

And there you have it, the complete comparison of the iRobot Roomba 890 vs. 960. We’ve highlighted every important feature of each Roomba to help you decide which one is better than the other. Even with a slightly higher price, the Roomba 960 is well worth it and is definitely the better choice.