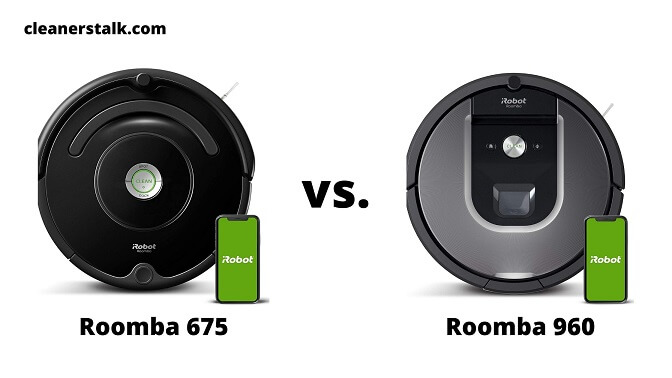 When new Roomba models are available in the market, older models become cheaper. So much so that older Roombas are becoming interesting options thanks to their reduced prices. One model in particular, the iRobot Roomba 675, is often compared with the Roomba 960 to determine if it's still worth buying.

In addition to their navigation technology, there are plenty of differences between the Roomba 675 and 960, including brushes and battery life. In this article, we will break down every feature and review the iRobot Roomba 675 vs. 960 comparison to find out if the Roomba 600 series can still get the job done.

Tale of the Tape

2-in-1 robot vacuum/mop with expert navigation

Let’s quickly do a quick overview of the Roomba 675 and Roomba 960. Both these circular-shaped robot vacuums come with Wi-Fi connectivity, giving you the ability to control them via the app or voice command. This is a common feature found in almost every robot vacuum in the market today.

Both Roombas have up to 500 ml of dustbin capacity, which is pretty much the standard. However, while the Roomba 675 boasts an 1800mAh battery with a runtime of up to 90 minutes, the Roomba 960 has double the capacity and boasts 120 minutes of runtime. Now let’s move over to the comparison.

The Roomba 675 utilizes the patented iAdapt navigation system from iRobot. It relies on a bump sensor to move around and avoid objects, while the cliff sensor protects the Roomba from falling down stairs. Expect the Roomba 675 to bump gently into obstacles and slowly find a better route when cleaning.

However, the older navigation system means that the Roomba 675 does not have the ability to create a map of your house, so it moves in a random pattern. It can easily move in smaller and simpler floor plans, but bigger houses with more complex floor plans can be a challenge for the Roomba 675.

Thanks to both a camera and the newer iAdapt 2.0 navigation system, the Roomba 960 can create a map of your house and move in an organized manner. It will move in neat, parallel lines while going back and forth over your floors. This is made possible because it has a clear layout of your house’s floor plan.

WINNER: The Roomba 960 is the clear-cut winner in terms of navigation. It’s basically a no-contest. With newer and updated navigation technology, the Roomba 960 can move around and avoid objects far better than the Roomba 675. Instead of slowly bumping into obstacles, it knows your house just like you do.

While the Roomba 675 can do alright on low-pile carpets, we don’t recommend using it on medium-pile carpets. Because the brush roller consists of the older blade and brush combo, it isn’t durable enough to go through carpets, especially high-pile carpets. More work can also mean less battery life for the Roomba.

The same goes for cleaning pet hair. While it can pick up hair and fur, we often find that the bristles get clogged often. You’re better off using the Roomba 675 on hardwood floors. That is where the robot excels at. After all, almost all robot vacuums work well on flat surfaces, and the Roomba 675 is no exception.

Just like any other robot vacuum, the Roomba 960 works extremely well on hardwood floors. Expect any dust and debris to get picked up by this robot. It can help you clean pet hair as well. Not only does the Roomba 960 have enough suction power to pick up pet hair, but the tangle-free rollers won’t get easily clogged.

However, another key difference between the Roomba 960 and the 675 is the carpet boost technology. The Roomba 960 will increase its motor speed and suction power when it is on carpet. This results in better carpet cleaning, as the carpet fibers get agitated and release all the dirt stuck deep within the carpet.

VERDICT: Once again, the Roomba 960 beats the Roomba 675, this time in cleaning performance. With its carpet boost technology, the Roomba 960 works better on carpet than the Roomba 675. Additionally, tangle-free brush rollers mean that you will spend less time untangling stubborn hair from your Roomba.

Two things caught our eyes when comparing the features of the Roomba 675 and 960. The filters and virtual barriers. First, let’s talk about the filters. The Roomba 960 is equipped with high-efficiency filters which capture up to 99% of allergens, while the Roomba 675 comes only with standard filters.

Secondly, the Roomba 960 ships with a dual-mode virtual wall barrier. The Roomba 675, however, doesn’t have one included with a purchase. While compatible with them, you need to buy the virtual barriers separately. That right there, is the final nail on the coffin for the Roomba 675, as the 960 is far better.

VERDICT: The Roomba 960 simply has better features. You’ll get more value with the Roomba 960 since you’ll be getting the virtual barriers. Moreover, the better quality filter means that you can rely on the Roomba 960 over the 675 if you want to prevent harmful allergens from circulating around your house.

It’s an overkill. The Roomba 960 is better than the Roomba 675 in every category. However, you do need to consider that the 960 is twice the price of the 675. If you are keen on enjoying the features found on the Roomba 960 listed above, then there’s no reason for not choosing it over the Roomba 675.

2-in-1 robot vacuum/mop with expert navigation

And there you go, the complete iRobot Roomba 675 vs. 960 comparison. It’s almost an unfair fight right from the start, as the 960 is the far better robot vacuum. However, the one aspect that may entice you to choose the 675 over the 960 is the price tag. With half the price of the 960, the 675 is still an amazing value option.