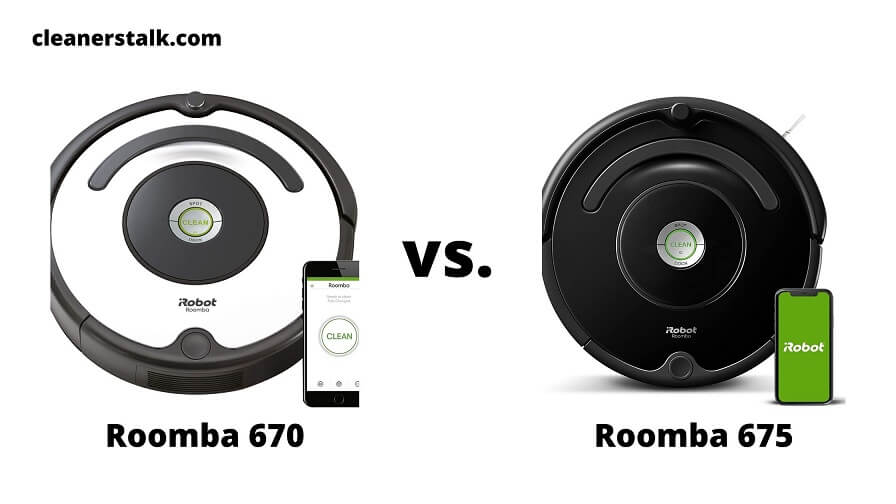 Looking to buy a smart robot vacuum without paying a large sum of money? Then you need to check out two of these affordable, mid-level options from iRobot. In fact, the Roomba 670 and 675 are still some of the most sought-after robot vacuums. So if they are both similar, what makes them different from each other?

The best part is, each time a company releases a new flagship, older products drop in price – that is why we’re going to decide whether the Roomba 600 Series is still worth buying. Hopefully, our short and concise comparison guide on the Roomba 670 vs. 675 can help you decide which one suits you best.

As mentioned before, both Roombas are identical in every aspect (except for color options), so we don’t see the point of doing a side-by-side comparison as we normally do. Every round will result in a tie. Instead, we will review each feature and decide whether the Roomba 600 Series is still worth buying.

Because we like to make your buying decision as simple as possible, we will review the Roomba 600 Series based on three of the most important criteria. You wouldn’t want to be overwhelmed by random facts about each Roomba now, would you? That said, here is the iRobot Roomba 670 vs. 675 comparison:

Let’s start with the basics. Both the Roomba 670 and 675 are equipped with 1800mAh batteries, allowing both robots to run for about 90 minutes. However, if you have plenty of carpets to clean, the expected runtime can decrease by about half. When the batteries get low, both will go to the charging station to recharge.

The Roomba 600 Series uses the 3-Stage Cleaning System. On the bottom, both have two multi-surface brushes, the first of which loosens and lifts dirt and debris, while the second pulls it into the suction channel. Both the 670 and 675 also feature one edge-sweeping side brush for cleaning corners. 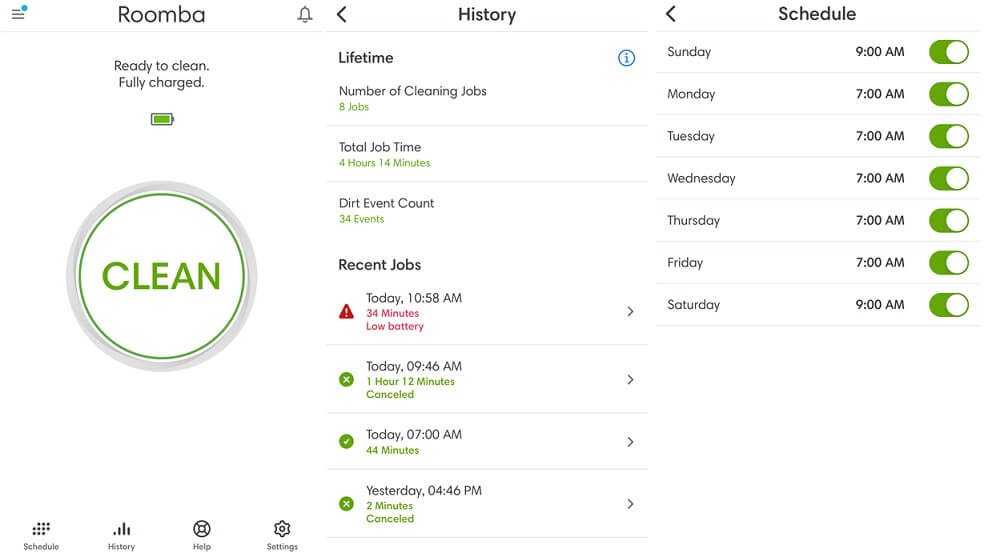 The iRobot Home app is very simple and easy to use. Both the Roomba 670 and 675 are compatible with the app.

As far as user experience goes, the iRobot app is simple and easy to use. It has a big CLEAN button in the middle and tabs on the bottom for Schedule, History, Help, and Settings. Thanks to their Wi-Fi connectivity, both Roombas support app and voice control and allow you to set cleaning schedules.

Thanks to iRobot’s iAdapt navigation system, both the Roomba 670 and 675 are smart enough to navigate under and around furniture with ease, including moving along edges. If either one detects an obstacle, it will slow down and go over it. If it cannot pass the obstacle, it changes direction or goes around it.

Additionally, both Roombas are equipped with cliff sensors to keep it from falling down stairs. The Cliff Detect technology is designed to recognize drops, ledges, and edges. When detected, the Roomba stops and changes direction. Unfortunately, we did find that both the Roomba 670 and 675 have trouble navigating dark floors.

The biggest drawback, however, is the absence of a camera in the Roomba 600 Series found only in the Roomba 900 and newer series. Roombas with cameras can map your home and resume cleaning after a charge. Sadly, both the Roomba 670 and 675 do not have any way of mapping your home.

Have you seen how amazing robot vacuums clean and pick up cereals on marketing videos? Let’s be honest. We all live in the real world where spills and messes, like dirty footprints and flying pet hair, happen randomly. Therefore, let’s see how well do the Roomba 670 and 675 clean in the real world:

Hard floors are the easiest surface for any Roomba to clean. That said, you won’t be needing your upright vacuum for a week or two because both the 670 and 675 do a good enough job for daily cleaning on hard floors. They move along edges well, though they can’t clean corners well because they are round.

Moreover, we are impressed with Roomba's Dirt Detect technology as it allows both the Roomba 670 and 675 to focus its cleaning effort in dirtier areas. When either one finds more dirt in one area, it will work harder to clean the same area until the sensors detect lesser particles in that specific area. Now that’s smart.

Carpets, on the other hand, are always a challenge for most robot vacuums, especially high-pile carpets. You can expect the Roomba 670 and 675 to work well on low-pile carpets, but results may vary on medium and high-pile carpets. The good thing is, both have no trouble adjusting to the different surfaces.

While both the Roomba 670 and 675 are advertised for having a 90-minute runtime, don’t expect it to run for so long if you have wall-to-wall carpet. You can expect approximately 45 to 50 minutes of runtime. This is not a bad thing, but it means you need more cleaning cycles to clean your entire house.

Final Verdict: Both the Roomba 670 and 675 are excellent mid-tier robot vacuums from iRobot that offer the same features found in more expensive models. You can expect Wi-Fi connectivity, Dirt Detect technology, and Amazon Alexa and Google Assistant integration, giving you the ability to voice control either Roombas.

And there you have it, the complete breakdown of the iRobot Roomba 670 vs. 675 comparison.

The lower price means that you will not enjoy powerful suction and advanced smart-mapping technology, found in newer Roomba models. But if you have a smaller floor plan, not a lot of carpet, and is simply looking for the best bang for your buck, either the Roomba 670 or 675 is more than enough for the job.

If you want to buy one of the Roomba 600 Series, we recommend buying the Roomba 675, simply because it’s more readily available in many locations. Both come at a similar price anyway. We also prefer the black on black color because it oozes more class and sophistication, compared to the white or gray color.