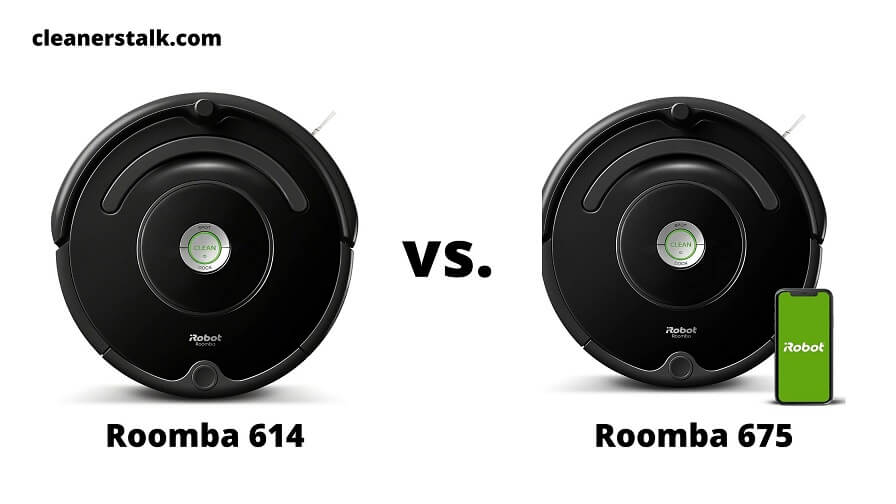 Are you hesitant to buy an expensive robot vacuum? We get it. Sometimes, you just don’t need to have the most advanced features that come with a Roomba. You just need a solid and reliable robot vacuum to clean your house. Two options to consider are the Roomba 614 and 675, which are often compared side by side.

With about a $50 difference in price, is it worth buying the Roomba 675 over the Roomba 614? And what about their cleaning performance? Are there any significant differences? In this post, we will compare the Roomba 614 vs. 675, both of which are excellent affordable options, and find out which one is ideal for you.

A simple robot vacuum that gets the job done.

Before we dive deep into the Roomba 614 vs. 675 comparison, let’s quickly go over the similarities. Both the Roomba 614 and Roomba 675 will run for about 90 minutes before going back to the charging station to recharge. Each robot will continue to run until the battery reaches about 15% before recharging itself.

As far as filtration goes, both are equipped with standard filters, not high-efficiency filters (which capture 99% of particles). However, this shouldn’t be an issue since all robot vacuums do not have HEPA filters anyway. Both robots come with a serviceable 0.5L capacity dustbin, which is pretty much the standard.

As mentioned in the beginning of this article, the main difference between the Roomba 614 and Roomba 675 is the wireless connectivity feature. What does this mean?

All of the buttons you need to operate the Roomba 614 is located on the body of the robot itself. It’s as simple as it gets. Just press CLEAN and the Roomba gets to work - no programming required. If you don't want the hassle of setting up anything on your smartphone, then this is perfect for you.

On the other hand, the Roomba 675 is equipped with wireless controls. Thanks to the smart home connectivity, the Roomba 675 works with Amazon Alexa and Google Assistant as well. You can control it either manually, via mobile app, or by voice command. As long as you have Wi-Fi, you’re good to go.

The voice command gives you the ability to start, stop, pause or continue a cleaning run, and send the Roomba to recharge. With the mobile app, you can edit and delete cleaning schedules, get battery charge approximations, perform hardware and software updates, and have access to valuable reports.

As both Roombas are marketed to clean carpet and hard floors, we’ve put them to the test to see how well they performed. The Roomba 614 and 675 both use the older blade and bristle combo to clean floors, which can easily get tangled with hair. With that said, let’s see how they stack up against each other. 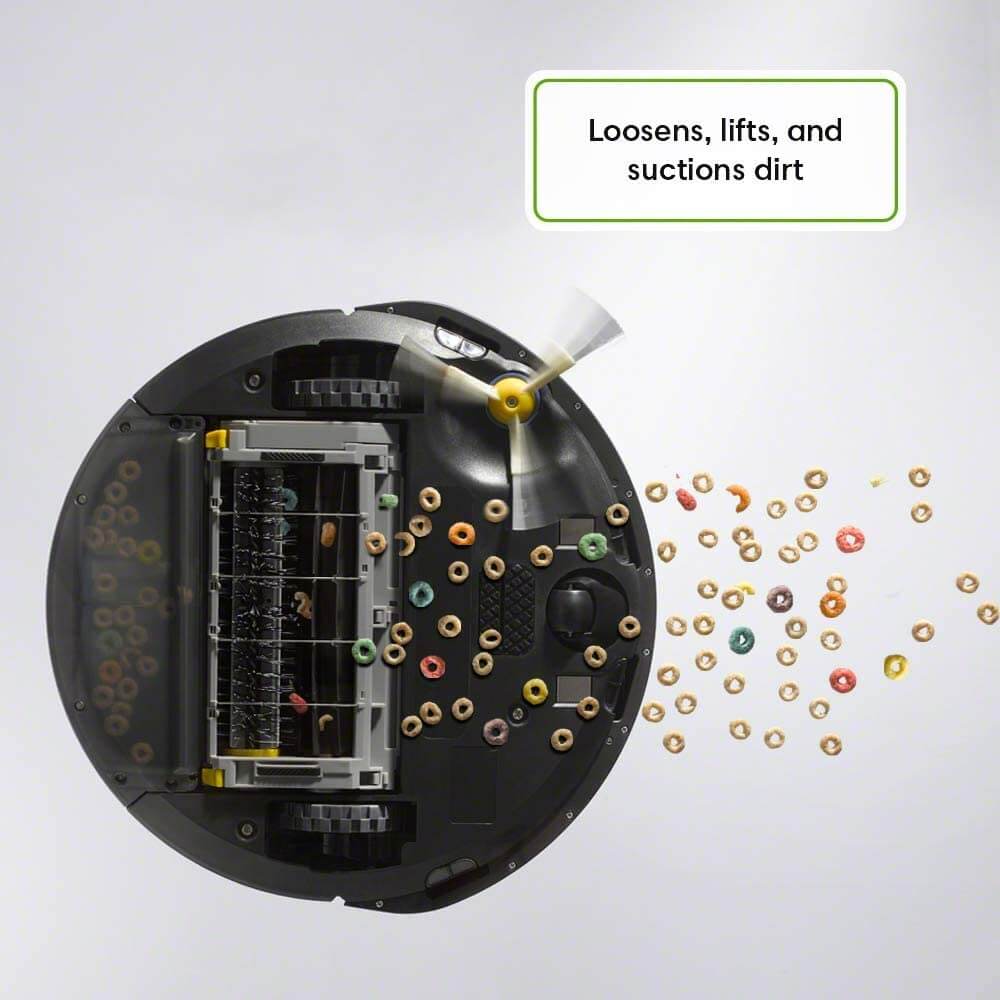 Hard floors are where all robot vacuums thrive. The Roomba 614 and 675 are no exception. With nothing to stand in their way, both robots are free to move around without getting stuck on anything. As far as cleaning hard floors, both the Roomba 614 and Roomba 675 do well enough to justify their prices.

With that said, you can expect both Roombas to pick up dirt excellently. After all, hard floors are easy enough for both Roombas to navigate around. Just be sure to not let them run over something wet, which will cause all sorts of trouble. You need a hybrid 2-in-1 hybrid robot vacuum/mop for that.

On the contrary, almost all robot vacuums will have a hard time on carpets. While the Roomba 614 and 675 work well on low-pile carpets, the results were a hit-or-miss on medium and high-pile carpets. The good news is, both Roombas can adjust the cleaner head on different surfaces accordingly.

Because both the Roomba 614 and 675 move in a random pattern, it’s best to supervise them when cleaning different areas. You may need to watch either Roombas for the first few cleaning runs to ensure they can get on (or off) the carpets, and that they don’t suck up the fringe or get caught.

VERDICT: It is a tie between the Roomba 614 and 675 in terms of cleaning performance. For the most part, you will be impressed by the amount of dust collected in the dustbin after just one cleaning cycle. As an investment for apartments and homes less than 1000 square feet, it is money well spent, for sure.

Both the Roomba 614 and Roomba 675 use the original iAdapt navigation system. Because both don’t have cameras or lasers, they cannot create maps and floor plans. Instead, they both use a combination of bump sensors and cliff sensors to avoid objects and safely navigate around your house. 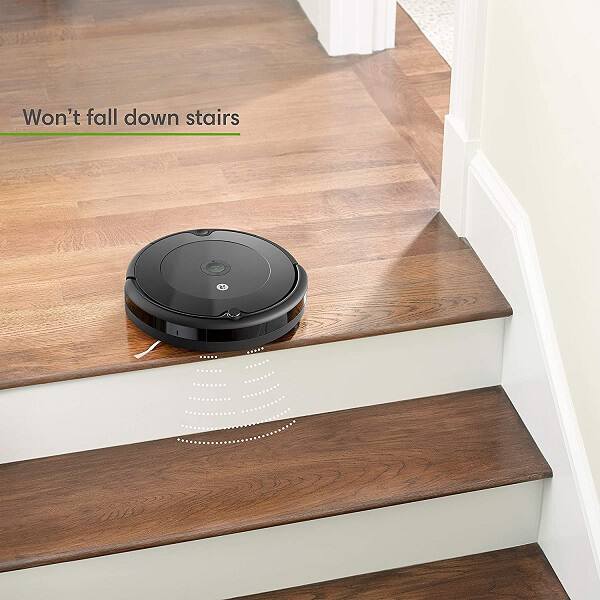 As the name suggests, the cliff sensors are used to detect cliffs, stairs, and edges. Any floor difference of more than half an inch will be recognized as a cliff. These prevent the Roomba from falling down stairs. We are fairly impressed by how well both Roombas move around despite using the older navigation system.

VERDICT: Using the same technology, both the Roomba 614 and Roomba 675 move around equally well. However, expect both Roombas to move in a random pattern, instead of neat and organized rows, simply because it employs the outdated iAdapt navigation system. It still gets the job done, though.

While both are excellent entry-level robot vacuums, the Roomba 675 is clearly the better choice. And by just paying an extra $50, you’ll get to enjoy the entire wireless controls of the Roomba 675. We don’t see any reason for buying the Roomba 614 over the 675. It’s newer, it’s better, and you it’s connected to your smartphone.

And there you go, the complete iRobot Roomba 614 vs. 675 comparison. Don’t sleep on the older Roomba models. They may not come with all the bells and whistles like newer models do, but they can still get the job done just as well. If you’re on a budget, almost all of the Roomba 600 series are worth your consideration.