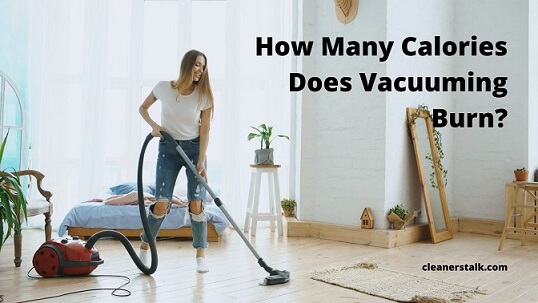 How Many Calories Does Vacuuming Burn?

Cleaners Talk is supported by its readers. This post contains affiliate links, we may earn a commission at no additional costs to you. We hope you love the products we recommend!

Have you ever worked up a sweat while doing house chores? Well, you’re not the only one. Performing house chores like vacuuming is a great way to get your heart rate up and burn some extra calories. So just how many calories does vacuuming burn exactly?

These are estimations, and though you may weigh these exact amounts, they are a starting point for you to determine your calorie burn. For example, if you weighed 135 pounds one would assume that your calories burned would come to about 112 calories. But does this mean you can skip the gym? Read to find out.

How Many Calories Does Vacuuming Burn?

Vacuuming is a multitasker’s dream -- burn calories while tidying up around the house, what’s not to like? Although you can work up a sweat, vacuuming is not considered an exercise, but rather a non-exercise activity thermogenesis (NEAT) movement. NEAT activities include anything except sleeping, eating, and exercise.

As vacuuming is a household chore it easily falls into this category. NEAT cardio contrasts with other forms of exercise, including:

While vacuuming is generally not considered anaerobic training as it falls into the NEAT category, you could increase the burn to bring up your heart rate and burn even more calories. You can push your body into aerobic exercise while vacuuming in a variety of ways, like:

Increasing the intensity of your vacuuming sessions can help you burn more calories. For example, a 150-pound person burns on average about 365 calories per hour when performing low-impact aerobic exercises. Both aerobic and NEAT movements are two great ways of getting an extra fat burn during your day.

However, while increasing the intensity of your vacuuming can help you burn more calories and push your body into an anaerobic state, can vacuuming fully replace your gym workouts? Does it count as exercise?

Does Vacuuming Count as Exercise? 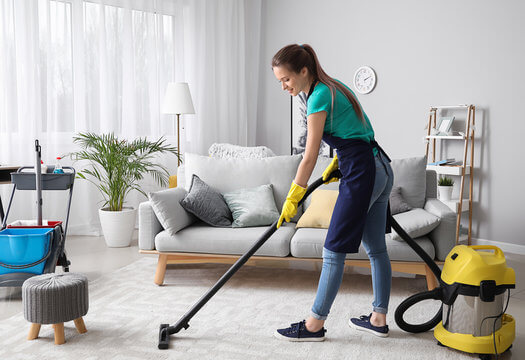 Only when you vacuum vigorously can it be considered an exercise.

As we’ve seen, because vacuuming is generally performed at a lower intensity and lower heart rate it is considered a NEAT activity, and therefore not considered to be an exercise. Generally, for something to be considered as exercise, you would need to bring up your heart rate to at least 60-80% of your maximum.

So how exactly do you determine that range? With some quick, simple math you will be able to determine your optimal range of calorie burn. All you have to do is take your age and subtract it from 220. For example, if I were 28 years old, my maximum possible heart rate would come to 192.

NEAT activity generally falls below the 60-80% range for aerobic activity, as it does not require much effort and intensity. For this reason, if you want to kill two birds with one stone you will have to find a way to up the intensity to move into aerobic activity, which burns more calories and counts as exercise.

While vacuuming is a great way to burn calories, many other household chores can also be added to the list. Incorporating more movement into your day -- no matter what kind -- will help you more easily reach your personal fitness goals and burn more daily calories.

What Chores Burn the Most Calories? 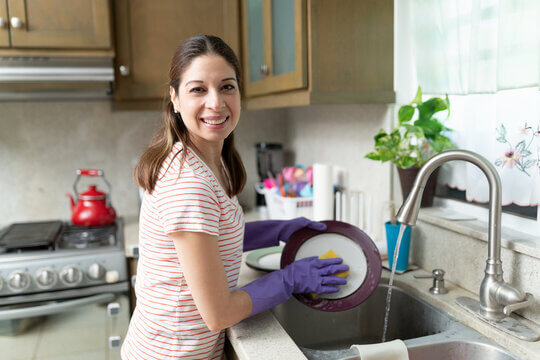 Besides vacuuming, washing the dishes burns more calories than you think!

Logically, the more intense a chore is the more energy you will need to perform it, and therefore the more calories you burn. The following is a list of the chores that burn the most calories, compared to vacuuming.

As you can see, vacuuming can be beaten out by many other chores when it comes to calories burned. If you are looking to skip the gym for a day, combine a few of these chores to get a burn going and shred fat. Though individually vacuuming can’t replace exercise, combining chores will do the trick.

As always, these are just estimations. Depending on the vigor in which you perform a task, and the intensity of your movement, you can burn more or fewer calories. How much you weigh also influences how much you burn, as those who weigh more require more energy to perform the same task, and they burn more calories.

Related: Should You Dust or Vacuum First?

And there you have it, the answer to the question: How many calories does vacuuming burn?

For those multitaskers out there, household chores can be a great way to get your heart pumping and tidy-up your space. Vacuuming is one great way to do so. While it’s generally not considered exercise, you can up the intensity and push your body into aerobic activity by performing other movements simultaneously.

In general, vacuuming won’t replace your need to work out and get to the gym. However, when performed with other household chores and at high intensity, it can burn just as much as an aerobic workout would. All this to say: any kind of movement is good movement! The more you move the more calories you burn.

I write about house cleaning and vacuum cleaners.  For me, nothing is more important than a clean environment to ensure both a healthy and happy life.