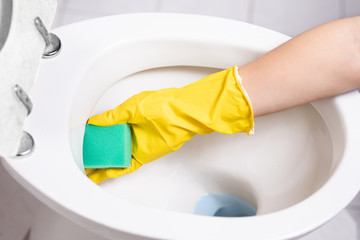 Indeed, there are plenty of articles on the internet that suggest how easy it is to use Magic Eraser to remove toilet bowl rings. In this article, we’ll debunk the whole thing and show you how it’s done.

Why Robot Vacuum Going in Circles

The internet is full of cleaning tips, but not all of them work. For example, one hack promises to transform your toilet bowl sparkling clean with no effort – by placing Magic Eraser in the bowl and leaving it overnight.

Other websites share something similar with a slightly different twist: let the Magic Eraser sit inside the toilet tank, and every time you flush, the “magical” sponge will clean your toilet bowl automatically.

These effortless hacks are based on the theory that the ingredient inside Magic Eraser, melamine foam, gets released into the water and magically cleans the toilet. Sounds too good to be true, doesn’t it?

Morgan Brashear, scientific communications manager at Procter & Gamble, says while the Magic Eraser is a great cleaning product for cleaning dirt around the toilet bowl and the exterior of the toilet (as an abrasive cleaner), it won’t actually prevent unsightly stains and rings inside of it.

This is what she suggests about this topic to Apartment Therapy:

“What people might not realize is that the Magic Eraser provides a mechanical clean, meaning there is no added chemistry in the Original and Extra Durable Erasers. At best, the Magic Eraser might act as an additional filter in the tank of your toilet, but there aren’t any cleaning chemicals inside the Eraser to be dispersed into the water as you flush.”

These white rectangular sponges are made of melamine foam, a material that works like extremely fine sandpaper. Basically, Magic Eraser works when you scrub it on hard surfaces.

Instead of using Magic Eraser as a makeshift toilet filter, use Magic Eraser how it’s intended: tackle stains from hard surfaces, remove grime from stovetops, or make glass shower doors and windows clean.

You can, however, scrub the toilet bowl ring with Magic Eraser

However, you’ll need to be careful when scrubbing things with Magic Eraser. The sponge is basically an abrasive cleaner, so to protect the skin on your hands and fingers, it’s best to wear rubber gloves.

Another tip is to cut the Magic Eraser into smaller pieces and use one piece at a time. Chances are, you can effectively remove any toilet bowl ring with a ¼ or ⅙ of the original Magic Eraser. By doing so, you save money on spending more Magic Erasers. If you want to learn more, here’s how to use Magic Eraser.

Now you know Magic Eraser can remove toilet bowl rings, but only when you use the magical sponge to scrub away the dirt. Placing the Magic Eraser inside the bowl or tank won’t magically clean your toilet.

And to keep your toilet clean? Unfortunately, there is no simple hack. As annoying as it is, you will need to deep clean your toilets once per week with an antibacterial cleaner, a toilet brush, and rubber gloves.

Cleaning your toilet bowl regularly will help keep germs at bay and prevent grime and hard water stains from building up. And once they build up, they will become more difficult to remove.