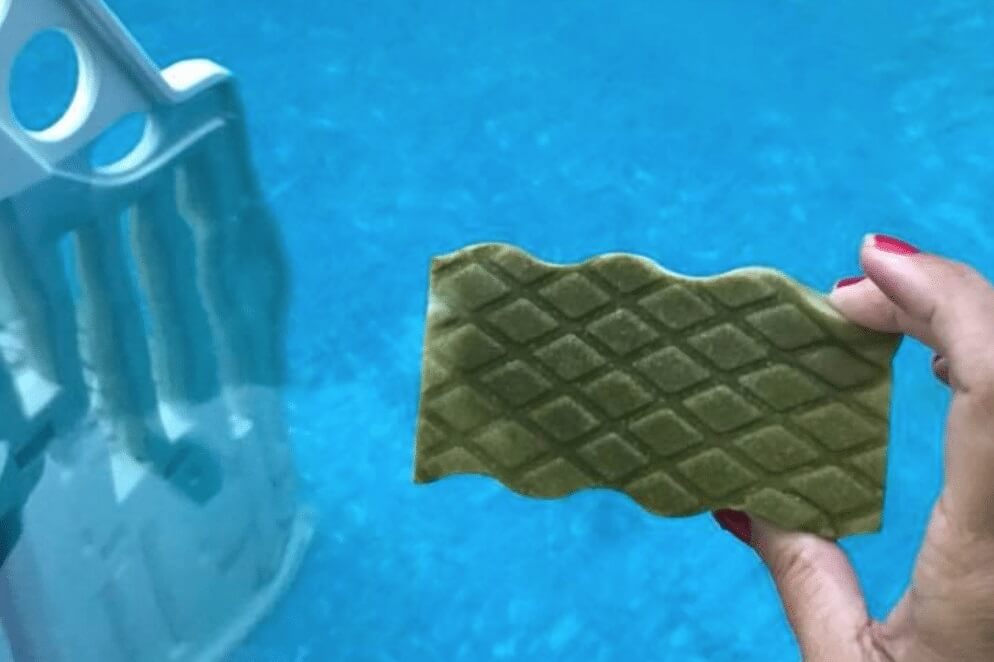 You’ve seen the viral swimming pool cleaning hack of putting Magic Eraser inside the skimmer basket, so you’re interested to give it a try. However, does Magic Eraser actually clean your pool?

Magic Eraser will collect some algae, but it's not going to make your pool magically clean, nor can it improve the water composition. If anything, the melamine in Magic Eraser can interact with the Cyanuric Acid (CYA) in the pool, potentially creating toxic byproducts or disrupting the chemical balance in a pool.

So, before you drop a Magic Eraser inside your swimming pool or inside the skimmer basket, you would want to read this article first. You’ll soon learn why you don’t want to put Magic Eraser in your pool.

Advertisement
Read the article
Why Robot Vacuum Going in Circles

How did the “Magic Eraser in your pool” hack start?

In a Facebook post that originally appeared in 2018 (and has since gone viral), Lisa Pack, a pool owner in Ohio, claimed that the best way to clean a stubbornly green pool is with the all-purpose Magic Eraser. 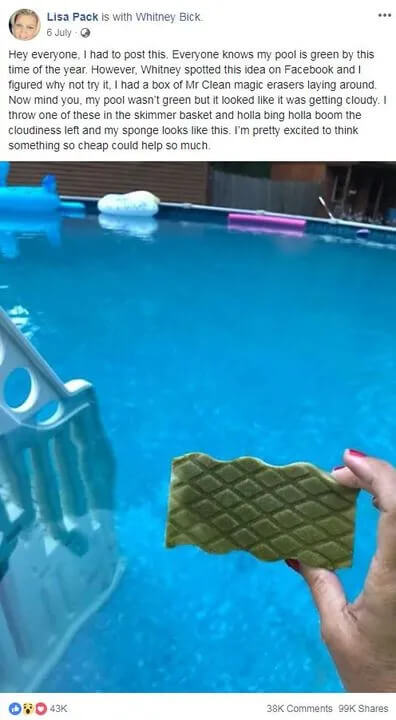 And the technique couldn't be easier. She wrote on Facebook:

"My pool wasn't green but it looked like it was getting cloudy. I threw one of these (Magic Eraser) in the skimmer basket and the cloudiness left and my sponge looked like this."

The Facebook post also included a photo of her holding up the green-tinted eraser in front of her newly-clean swimming pool. Pack, along with hundreds of thousands of commenters, have since been in awe over how effective such a small and inexpensive product is at cleaning a swimming pool.

To date, her Facebook post has been shared over 490,000 times and has generated more than 160,000 comments. Her newfound social media brought her an interview with Inside Edition.

Lisa Park stated in the interview that her pool is surrounded by trees, which she believes contribute to the green tint in her pool, in addition to regular landscaping maintenance like mowing her lawn.

Prior to putting a Magic Eraser in her pool skimmer, which was actually her daughter's idea, Lisa Park would spend at least 45 minutes each week cleaning her pool to rid it of natural grime and debris.

Does Magic Eraser clean your pool?

The popularity of the “Magic Eraser to clean your pool” viral hack piqued the interest of many people, including several pool technicians. Andrea Nannini of Custom Pool and Spa Mechanics in Stuart, FL used the opportunity to test the theory behind Lisa Pack’s swimming pool and Magic Eraser hack.

One of the tests performed by Nannini is placing a Magic Eraser inside a jar filled with green water. The Magic Eraser absorbed some of the algae in the water, but did not completely remove the algae from the water.

After a series of tests, the results confirmed that a Magic Eraser does not clean your swimming pool. Not to mention, the Magic Eraser isn’t actively maintaining or correcting the chemical levels of your pool.

It’s also worth noting that Lisa Pack’s water inside her pool was not very green to begin with. It’s cloudy at worst. To be fair, Magic Eraser will eliminate some of the dirt in the water, but only to a certain extent.

One thing you need to know about Magic Eraser is that the product works as an abrasive cleaner. Think of extremely fine sandpaper. It’s most effective for scrubbing away dirt and stains from hard surfaces.all

Putting Magic Eraser in your pool is actually dangerous

You may be thinking: There’s no harm in putting a Magic Eraser inside the pool skimmer, right? After all, some of the algae would be removed, although it won’t completely correct the chemical levels of the pool.

There is a chemical in Magic Eraser called melamine.

One theory suggests that melamine, also used in CYA tests, might actually contribute to stabilizing your pool water. However, according to her research, if the water has Cyanuric Acid (CYA) in it already, introducing melamine would create a toxic byproduct called Melamine Cyanurate.

Taking things to another level, Andrea Nannini contacted the manufacturer of Magic Eraser and asked about using the product in swimming pools. The company replied by saying:

“The answer to your question is no, we have not tested the products in pools, and the chlorine may react or interfere with the ingredients in the product.”

And there you have it. Although her tests are not complete, the overall conclusion is that a Magic Eraser is not an effective product for pool treatment and can also create a toxic byproduct that may be unsafe.

Magic Eraser, when used correctly, is non-toxic and not dangerous. Therefore, there’s no need for you to worry about using a Magic Eraser. As long as you learn how to use it properly, it’s one of the best cleaning products.

Now you know that Magic Eraser doesn’t clean your swimming pool. It is not only potentially dangerous but also ineffective. Please don’t put Magic Eraser in the skimmer basket expecting a “magical” result.