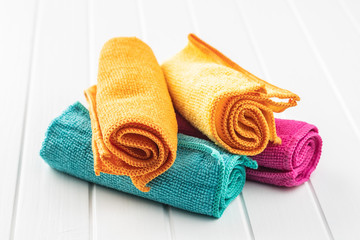 Lint is an issue for almost everyone, whether it’s on a new suit jacket, the screen of a 72” flat screen, or clogging the vent of a game console. It is unwelcome and sometimes extremely hard to eliminate.

Authentic microfiber cloths are lint-free. Their synthetic and microscopic structure will not allow the production or deposit of lint. However, not all microscopic material is created equal.

Just because a cloth is labeled “microfiber” doesn’t mean it has the authentic makeup and performance of a genuine microfiber towel or cloth. Microfiber cloths consist of specific materials.

One of the main reasons microfiber cloths repel lint is because it is synthetically assembled to do just that. The fibers consist of nylon, polyester, and polyamides. These elements are incredibly durable and highly absorbent. In fact, microfiber cloths can hold an amount of liquid equal to 6 to 8 times their weight.

Unlike cotton, the synthetic fibers do not shrink or expand. The structure allows them to repel lint. There is limited surface area to hold onto lint because each fiber has been mechanically split into tiny filaments.

Believe it or not, microfibers are 100 times finer than a single strand of human hair. This unique structure allows it to pick up an exponentially greater amount of dirt and debris, while repelling lint at the same time.

Why does your microfiber cloth have lint?

1. Your microfiber cloth is “fake”

Not all products labeled as microfiber are actually real microfiber. A lot of companies sell cotton clothes because the material is one of the most widely used materials when it comes to cleaning.

Microfiber is slowly catching on, but the name is often misused in place of cotton. This is probably why your “fake” microfiber cloth is producing lint. Additionally, some microfiber cloths are actually 50% cotton 50% polyester (or a similar blend), which may still produce lint to some extent.

Remember, several products on the market claim to be authentic microfiber materials. Always be sure to purchase the real deal. There are a few ways to test your microfiber towels and cloths.

First, examine the feel of the fabric. Microfiber has a textured surface. It should be easily gripped and feel soft to the touch. Be sure to choose a thick, dense, and durable microfiber cloth.

Next, try it out. Test the cloth on a mess or spill. Microfiber towels and cloths will produce a lint- and streak-free clean without leaving any residue behind. Lastly, run the cloth over a puddle of liquid. An authentic microfiber cloth will not leave behind a drop. A good microfiber cloth should pass all these tests.

2. Lint from surfaces, not from the cloth

Often, there’s lint on a microfiber cloth simply because you’ve wiped it off of a surface. As the dust settles, microfiber removes it like a sponge. This isn’t uncommon, especially if you have pets, carpet, or a lot of fabric around your house. Microfiber can pick up lint, but you can easily remove it.

3. Your microfiber cloth is damaged

Microfiber cloths aim to provide approximately 3 to 5 years of good use before normal wear and tear will take over, depending on the quality. Heavy usage or damage can invite lint onto your microfiber cloth. Alternatively, leaving the cloth out in the sun for too long shortens its life.

Improper washing and drying can also ruin microfiber cloths. Although you can use a washing machine on any washing cycle, polyester and other synthetic fibers shouldn’t be dried in high-heat settings. The plastic can warp and shed. Microfiber is best hand-washed to prevent damage on its fibers.

4. Your microfiber cloth is shedding plastic particles, not lint

Old microfiber cloths can shed plastic particles. They release small plastic bits that might look like lint, especially if any of the previous scenarios apply. Unfortunately, plastic pollution is one of the few major drawbacks of using a microfiber cloth to clean your home.

How to remove lint from microfiber cloths

1. Use a lint roller

A lint roller is the obvious solution. It is designed to do what its name suggests: roll lint off of a surface. Microfiber cloths can collect plenty of dust since they’re highly absorbent, so keeping a lint roller nearby will ensure the cloth stays pristine. If you don’t have a lint roller, try these alternatives.

2. Soak the microfiber cloth in warm water and soap

A quick and easy way to remove lint from a microfiber cloth is to soak it in warm water with soap. Warm water separates the fibers enough to let lint and debris float around the water.

Avoid using hot water because the temperature may permanently damage the microfiber. You don’t have to use soap, but why not clean the cloth in the process? Let it soak for 30 minutes, then air dry it.

3. Use tape to collect lint

4. Scrub the microfiber cloth gently with a toothbrush

5. Use Velcro pads to remove lint

Last but not least, try using Velcro pads to remove the lint. Velcro attaches to microfiber, but you can quickly peel it off to remove excess debris. Whether you’re taking off lint, dust, or crumbs, Velcro strips are worth trying if you use microfiber or other synthetic materials to clean your home.

Are microfiber cloths lint-free? Absolutely! Microfiber cloths and towels are a great, lint-free option for handling your cleaning needs. A significant portion of cleaning gets done to remove lint from several different textures and surfaces. If they collect lint, you can easily remove them with the methods above.